This is the second weekly update of hopefully hundreds! If you have not already read the first one please do it has a lot of information that you wouldn\’t find by just looking at Zwift update notes and things like that. Last week the feature related things were mainly about workouts. This week it will be focused on the feature that removes the HUD so that you can enjoy more of the scenery. This week I have some exciting stuff about me, tour4kids was very exciting this weekend (more on that in a bit), I have a quick zwift tip to share, and there is quite a bit of Zwifty news to catch up on!

This upcoming Zwift fondo will now include an ultima fondo featuring the Uber Pretzel. Hopefully they keep changing the routes up like this to give riders a chance to tackle some of the harder routes in watopia.

Season 2 of Zwift Racing League is officially over! Here are a few of the winning teams from the community divisions. If your team won one of the divisions leave a comment and I will feature your team in this section! Coming in first for the A-1\’s for Women is team Project Beastmode! For the mens A cat division the winner was BZR-Sportsolid eSports Team Red. Let me know in the comments if you raced and what division you were in!

This week I will be writing about the HUDless mode that Zwift has been trying out for quite some time. While this isn\’t a major feature, it is still a feature. There is not much to test and fix I don\’t think for this mode because all it does is removes your data from the screen so this should be out in the next few updates if no major bugs come up during the testing. They have these rides pretty frequently and they are E category group rides where you go your own pace and enjoy the scenery! They are usually at 5pm pst but there are more at other times throughout the week and days. This mode is not turned on for the Futureworks races, only the Zwift HQ beta rides. Here is a picture of the brief intro that Zwift gives when you join the event. 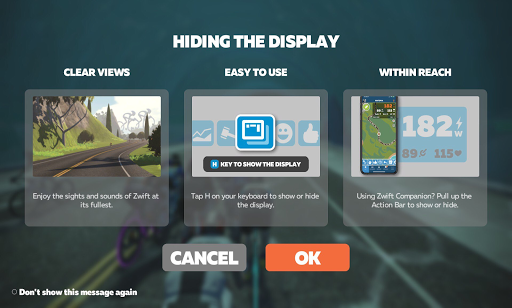 The zwift tip for this week is not so much of a tip within Zwift. Instead it is a website related to Zwift that is all about having fun and giving you a laugh. This website is Zwiftirl.com. You can import a picture of you in real life(or on zwift) then create your own achievement and many more things! Check it out! Here is an example of one that I made. I didn\’t have a picture of me IRL so I just used a zwift photo.

I finally got the 858/disc wheel after doing a lot of workouts up the alpe and riding extra. This wheelset is extra special because it is rainbow and it is the fastest wheelset out there and it makes the venge faster than the tron bike on flats and rolling hills. I also picked up another frame and a helmet. The helmet was from the level up and I bought the bike because I felt like buying a new bike. The bike that I bought was the P5X.

One thought on “Weekly Zwift Update 2”

Tour4kids is back! We need more sign-ups to make this event happen! Details and sign-up here: https://pursuitcyclingforkids.com/2021/12/12/tour4kids-winter-edition-4-details/. This weekends BYT saturday social ride. Let's see how many people we can get to join! Last week we saw over 420 riders register! https://www.zwift.com/events/view/2629092.